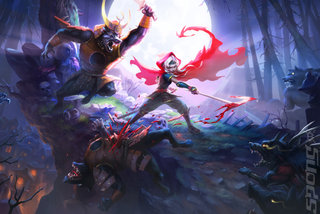 American McGee?s Spicy Horse studio has spent nearly two years and $1.7-million working on Akaneiro: Demon Hunters having raised some $200,000 and now, well, it's scaling the whole thing down to a team of two.

Says American, "Since that time, we've maintained a development team averaging 15 people/month on the project. In total, around 360 man-months have gone towards development, bringing our investment in dollars to nearly $2 million USD. In that same period, we've generated roughly 300kUSD in revenue - this includes funds collected via the Kickstarter campaign, F2P purchases in-game, and one-time purchases via Steam. In simple math: We've spent $2 million, we've made $300k, we're "in the hole" $1.7 million."

He continues, "Our Shanghai-based development team recently underwent downsizing so that all resources can be directed towards the one game that offers the greatest chance of bringing much-needed stability to our studio. If we can achieve our goals with The Gate, then we can bring greater attention to Akaneiro. "