People were led to believe it was a horror game. 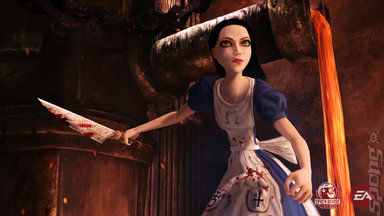 Did you feel somewhat disappointed with Alice: Madness Returns? Creator American McGee has suggested that this might well be down to EA's marketing teams - who he says wanted to "trick" gamers into thinking the game was darker than it really was.

In an 'Ask Me Anything' Q&A round on RedditA, McGee said that consumers were rightly confused when they found out Alice: Madness Returns wasn't the 'hardcore horror title' that promotional trailers and material purported it to be. And it was a decision that was totally out of his hands.

"What is frustrating was how EA marketing interfered - telling STS (the external creative agency responsible for the Alice trailers) from the start that all creative direction and final say would come from them, not from us (the developer/creator of the story/tone)," he wrote.

"That resulted in trailers that were much darker and gorier than in the game... and that was a calculated disconnected created by EA. They wanted to 'trick' gamers into believing A:MR was a hardcore horror title, even though we refused to develop it in that tone.

"Their thinking is, even if the game isn't a hardcore horror title, you can market it as one and trick those customers into buying it (while driving away more casual customers, like female gamers, who might be turned off by really dark trailers. It's all a part of the race to the bottom that EA, Activision and the other big pubs are engaged in. Epect to see it get worse before it gets better."