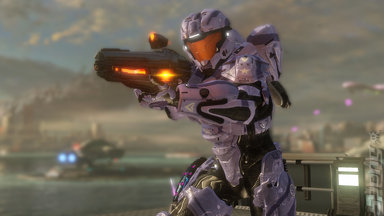 Well, Halo 4 designer David Ellis who, let's face it makes his money designing entirely sex-free gameplay that involves shooting things dead - thinks it's all very disgusting indeed. He went to Twitter with his disgust at Kojima's attempt to appeal to the lowest instincts in young, straight men or gay women to make money!

Don't care if this gets me in trouble. This character design is disgusting. Our industry should be better than this. http://t.co/4CCaF1qNEP

No, that probably won't get you into trouble. But there was more!

Ouch! Now, back to shooting buglike creatures and calling other people lamo-noobz!

For his part, Kojima has predictably backtracked, saying yesterday that:

"You're going to notice [when you play,] but there's limited dialogue with the [Metal Gear Solid 5], and for that reason we really want to show the characteristic from each character. "Sexy could be for guys, weapons, vehicles, it's really that characteristic."

All of this, reports Polygon, was said via a translator.

Joji 6 Sep 2013 14:34
1/1
The irony here is while I agree with David, he needs to check his shoes at the door. Halo has Cortana as a naked female A.I, when she doesn't have to be that way at all. Seeing it these days make Halo look silly.