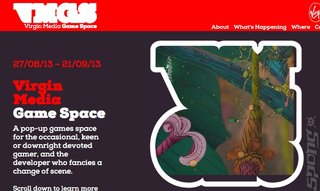 Because nobody develops or plays games outside the capital, Virgin Media has set up a 'Game Hub' in what Londoners lovingly call, 'Silicon Roundabout'.

The 'Hub', according to the blurb, will attempt "to champion the future of British gaming. The Virgin Media Games Space will be powered by the company?s superfast broadband, providing speeds of up to 1Gb, and will include a stellar line-up of games to play, industry talks to inspire and workshops to help create the next generation of gaming developers." But let's put our non-London, there is somewhere else in the country, cynicism aside for one moment to see how this selfless championing works.

For a start, the Hub or `Game Space' doesn't have an office manager or caretaker it has a curator, and he says things. David Hayward, curator and event producer, said: ?It's immensely exciting that London is getting its first game space, and I'm very pleased to be curating it. Games are such a diverse thing now, and I think Virgin Media Games Space will be an excellent way of supporting that.? That sort of thing.