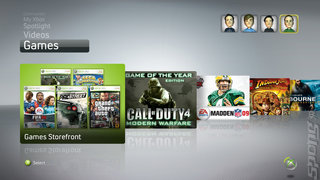 Virgin 1 has signed up with Microsoft to promote its coverage of the Ultimate Fighting Championship.

The ad will appear in the Xbox Live interface.

Why there rather than in-game? Well, according to a Microsoft video aimed at selling advertising (shown below), the advantage of slotting ads into Xbox Live menus is that, "To a user, it all appears to be showcasing content they want." Note the word 'appears'. It seems to suggest that the appearance might be different to the reality. Strange, that.

The UFC ad marks the first time Virgin 1 has used a games console as a serious marketing tool.

For more on how you're being advertised to through Xbox Live, see the video below.