Exclusive: Hands on with Downforce for the Game Boy Advance

Can the GBA offer anything new to the racing genre? 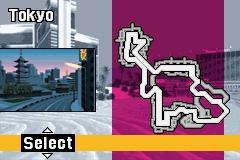 All Images (2) »
Why, yes it can. Downforce, developed by Smart Dog, and also released on the PlayStation 2, is one of the best looking Mode 7 racers we have ever seen. In a break from the Mario Kart-inspired, over-exaggerated pseudo-3D environments that have accompanied most GBA racers, Downforce looks truly 3-dimensional.

It has a great simulated vanishing point and the console displays the tracks admirably. Racing games have come a long way since the first-generation offerings like Moto GP and GT Advance, which seemed sloppy and a bit random. Downforce is tight and feels responsive.

It has an applied physics model that is another first for a GBA racer. The cars slide at the back, making liberal use of opposite lock a necessity. The development team are obviously fans of the Gran Turismo series, as to succeed at GBA Downforce, you must master the lift-off, oversteer method of racing. This is achieved by lifting off the throttle as the corner approaches. Slightly before the apex, you oversteer (turn more than you would have to if travelling at a sensible speed) making the tail end of your vehicle begin to slide. As you pass the apex, hit down on the throttle and tap the steering into the corner. It works a treat and is hugely pleasing, especially when you consider previous offerings for Nintendo?s portable.

A truly unique feature of the GBA?s Downforce is the sound of the engine as you race around the tracks. It has a realistic squeal at high speed that could grace many home console F1 games. It seems as though the developers have taken great pains to allow Downforce to make a noise that distorts on the GBA speaker. It really does sound fantastic.

Downforce for GBA is due out on May 17.