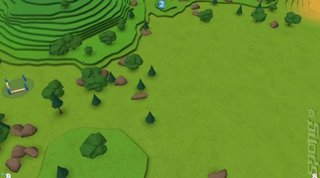 UK-based developer, 22 Cans (prop: P Molyneux) is currently producing a game called Godus. In order to do this it is seeking Kickstarter funding. In order to attract that, it has produced actual footage of the game.

The game, which is still seeking to reach its Ł450,000 Kickstarter goal or, we assume, it won't be made is, according to 22 Cans, "a delightful reinvention of the god game." It will be available on Mac, PC, Mobile iOS & Android.