Molyneux: Wii U is "Good, But Not Great"

Two-screen play can be confusing. 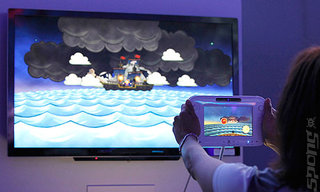 Peter Molyneux has gone through a range of emotions in the past week - from tearful passion to "incredible" excitement. Today, he seems a little disappointed - and that's down to his experience with Nintendo's Wii U console.

"I think the Wii U is good, but I don?t feel it?s great," he told GamesIndustry. "I find holding the device in my hand ? looking up at the screen and looking down at the device ? slightly confusing as a consumer."

He added that, although he had fun with the launch titles, that he still didn't find them "great... And we really need these new pieces of hardware to be great in today?s world, because the competition is not just consoles anymore."

Don't strike the 22Cans creative lead out from being a Wii U believer just yet - the legendary developer added that the Wii was derided at launch, but it "went on to sell what, 60, 70 million copies? It got people who never considered computer games to play them." Perhaps the same could happen for Wii U? Who knows.
Companies: 22 Cans
People: Peter Molyneux