Frozenbyte's Delight at Nintendo eShop Policy - as Good as Steam 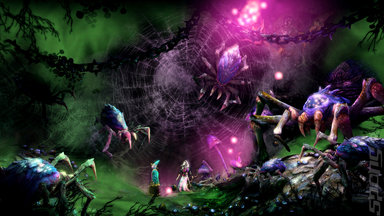 E3 2012
So there seems to be a lot of overblown Wii U problems being spread around the internet (hint: don't be a dunce and brick your own console), but it's now time for some good news. For indie developers, that is - according to Trine 2 studio Frozenbyte, Nintendo's new online distribution policy is so good, it's on a par with Steam and Apple's App Store.

Marketing manager Mikael Haveri sat down with IGN and revealed that the House of Mario has learned a lot from its experience with handling the WiiWare service. Namely, the ability for indies to set their own prices and sale dates - and to patch their game an unlimited number of times, for free.

"We have the power to price our products as we please, with just some basic guidelines from the big guys," Haveri said. "The step to this is purely from Nintendo's side and they clearly see that [their] previous installments have not been up to par.

"We can set our own pricing and actually continuing on that by setting our own sales whenever we want. It is very close to what Apple and Steam are doing at the moment, and very indie friendly."

Perhaps the big win for studios like Frozenbyte is the free update capability, which means that small developers won't have to pay reportedly 'extortionate' amounts of money to fix problems with a game post-launch. It's an issue that has been a sticking point with the industry since Fez developer Polytron made a big deal out of the "tens of thousands of dollars" that Microsoft charged after the first patch.

Haveri seems to agree with Polytron. "Simply put, they've told us that there are no basic payments for each patch (which were pretty high on most platforms) and that we can update our game almost as much as we want. For indie developers this is huge."
Companies: Frozenbyte
Games: Trine 2