Long install times can't save you from bricking your console, though. 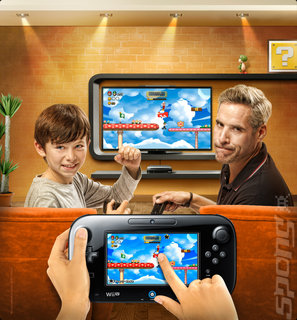 "Hurry up and download that bloody update already!"
Nintendo's brave, if not untimely, jump into the online space with Wii U has had a few teething problems. One of which is the reportedly long wait that owners are experiencing in updating their new consoles. A 5GB system software release is resulting in installation times of between one to four hours.

UPDATE (12:09) It has since been claimed that the Wii U system software update is only around 1-1.5GB in size, and that Nintendo's servers were in fact just being a bit creaky. If true, it appears things have been blown out of proportion somewhat. We leave the rest of the original story unedited below. UPDATE ENDS

The update, released at the Wii U's launch, allows users to access online features such as Miiverse, and also enables the transfer of data between a Wii and a Wii U. So for some gamers, it's pretty important. One user on Twitter, @LouisLamarche, lamented on the length of time he had to wait by posting this picture some half an hour after initiating the update (via Kotaku).

What could the problem be? Nintendo hasn't clarified yet, although we've asked. It could be a lacklustre ability for the Wii U console to connect to the internet and download content, or it could be Nintendo's servers getting hammered by countless connections from users.

Either way, one technology critic fell foul of a complete system bricking. Fearing that his Wii U had crashed mid-update, L.A. Times reporter Ben Fritz decided to switch his console off and on again. Naturally, as is the case with most consoles mid-update, the process rendered his system useless. Whoopsie. Let Ben's story be a lesson for all.

Regardless, do you think Nintendo's dragging its virtual heels a little bit with the whole launch system software update thing? Let us know in the usual place.
Companies: Nintendo

dave 19 Nov 2012 15:28
1/1
wii u is awsome black ops looks fantastic and had the most fun ever with my wife and 4 year old on catch mario and other nintendo land games. dont regret my purchse as all.
Posting of new comments is now locked for this page.