The bigger the ambition, the more likely the failure, the more to learn 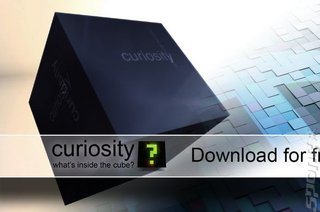 Curiosity: What's Inside the Cube? is Peter Molyneux and his 22 Cans team of crunched coders and designers' "experiment" and it's suffering due to its own experimental conditions.

The experimental conditions - in which people download a free app that makes them tap away the layers of skin on a virtual cube - also needed servers; and the servers screwed up. So today, where once it was claimed that 150,000 people were participating at any one time, we are now down to 20,000 according to Mr Molyneux himself.

The first figure came in an interview from November 13th with Nowgamer writer David Lynch it is stated, "The first terrible thing that happened was that 150,000 (people online tapping) was achieved within 12 hours of the app being launched and the second terrible thing was that it wasn?t that people were tapping a few hundred times, but some people were tapping a few hundred thousand times."

The second figure comes today via a piece in MCV that demands that we should not "dare lose faith" in Curiosity. In this the legend of UK gaming says, "20,000 people trying to tap simultaneously is a unique problem that I?ve never faced before. We?ve got to use the technology in this in another game and that?s going to be out very soon and we couldn?t get away with this level of service for sure. But we?ve learnt through a baptism of fire what we did wrong and that?s part of the experiment.?

So, that is either the server problems have caused a huge loss of user confidence and of users or some stats were wrong yesterday?

Either way, Peter Molyneux and team have invested in new server tech and he says that, "It may sound strange to say but Curiosity is quite robust."

What he means apparently is that, "It doesn?t crash, per se. The actual client stuff works quite well. But the problem is all the server-based stuff. It?s really, really problematic.

?But we can solve the server issue. We had one server ? we now have 15 servers. We can double, triple, quadruple ? we could use every server London?s got. It?s getting a bit scary. You pay for the server and you pay for the data and we?re not quite sure how much that will cost us. We?re working on that now."

Let's hope so because, he says, "We?ve got so many delightful charming moments coming up. I?m on the point of tears now just thinking about it. It is a magical thing. We?ve got all these plans ? slight subtle rule changes, there are psychological experiments in there, we?ve got brand new features ready to roll out but it?s insane for us to do that while we?ve got this massive server issue. We?ve got all this stuff ready to go but we?re just not ready to go on it.?

We're still not entirely sure what not crashing "per se" means though. Tell us about your experiences by posting in our non-crashing-at-all Forum.
Companies: 22 Cans
People: Peter Molyneux
Games: Curiosity: What's Inside the Cube?

realvictory 14 Nov 2012 13:45
1/1
Personally, I stopped because it was so slow to update. If you can't see other peoples' taps/current progress, then what exactly is its purpose? Without the proper feedback, I might as well tap on the screen, regardless of which app is running.
Posting of new comments is now locked for this page.