Peter Molyneux's Wants to Sell One Piece of DLC for È50,000 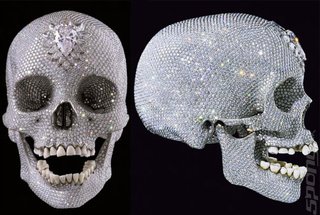 Molyneux is the better artist: Discuss
Peter Molyneux's new company, 22 Cans, was set up to work on 'truly innovational and experimental ideas'. Now, if we can all looks past the use of "innovational", we can concentrate on the first of the company's 22 experiments in gaming. It's called 'Curiosity'. It has one piece of DLC that costs È50,000.

It "puts players in a virtual room containing a single black cube. Players tap away at the cube, causing it to fracture and shed tiny layers from the surface. Other fractures also appear because everyone playing the game is tapping away at the same black cube.

"After an undivulged, large number of taps, the cube will open, revealing something... "

Things are not as simple as they seem though because, "only the player who performs the final tap will get to see inside the cube."

The experiment according to Molyneux is that announcing the find will depend, "entirely on social media. Molyneux, himself wants to know, "How will this person prove it? That in itself becomes a fascinating aspect of this experiment."

Now for the DLC: there will be a "limited number of chisels to amplify their tapping strength." Costs range from 59 pence. Nice but then there is a "diamond chisel that is 100,000 times as powerful."

Molyneux will only sell one diamond chisel - and it will cost È50,000. Even Molyneux admits that, "It's an insane amount of money".

It is. Is anybody insane enough to spend it on the off chance that they're tap will be the one that springs the secret? That's the point. Is the secret È50,001 in cash? Is it a dead frog? Is this merely a publicity stunt and nothing at all to do with 'psychological experiment'? I reckon so, but what do you think?