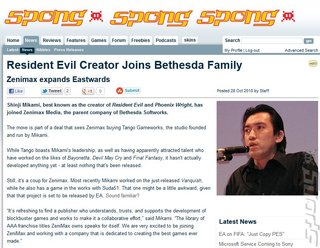 That was then...
Shinji Mikami, best known as the creator of Resident Evil and Phoenix Wright, and his Tango Gameworks studio are working on a new game. It's a... Survival Horror title.

This comes six months after the studio was bought by Bethesda owner, Zenimax.

According to Andrisang, "Famitsu reveals this week that the game is codenamed Zwei. In an interview with the magazine, Mikami reveals the game to be packed with Mikami-like survival horror elements.

Mikami will be the game's executive director. More when we get it.