$13 Million for Psychonauts 2? Notch Says "I Can Do That"

Minecraft inventor seems to be made of money 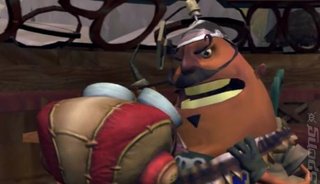 Who needs crowd-funding when you've got a fan like Markus 'Notch' Persson? Tim Schafer of Double Fine apparently.

Earlier this month Notch decided to use Twitter to tell Schafer that they should make Psychonauts 2 "happen". All good stuff, the origina (2006)l Psychonauts was an imaginative attempt to make video games extend beyond the linear.

Apparently it cost some $13million to make.

According to Shafer, "As soon as I mentioned the amount of money he said, 'Yeah, I can do that.'" So, where are we?

Tim Shafer says of Notch, "He's been pretty successful. And, when you look into it, it's a really inspiring story. He's just a regular guy. He didn't do anything sleazy to get it. He just made it himself, distributed it himself, it's a great story. I think we have a lot to learn from him, so I'd like to do something with him.