He was taken out of context 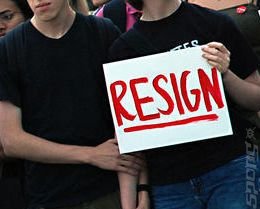 Wedbush Morgan analyst, friend of the industry, media star and apparently workaholic Michael Pachter has defended his comments regarding game developers and 'Crunchtime'. He was taken out of context.

We all thought he said things like, "If your complaint is you worked overtime and didnÆt get paid for it, find another profession"... and ōI do get that it is a bad and unfair business practice to work 18 months non-stop overtime, I donÆt think anybody was entitled to overtime pay.ö

What he meant was:

"While I don't like to see workers treated unfairly, I have to acknowledge professionally that their recourse is to unionise or quit. I don't think unions work in the game industry, so I suggested that they quit."

The option for the employer to create a working environment, to schedule professionally and the bear in mind that all video games are created by teams of people doesn't seem to enter his thinking.

Maybe this is because he is too busy. He tells NextGen:

"I travel 60 nights away from home per year, with 48 constituting client visits," he continues. "On those days, I work generally from 7am til 10pm. I travel exclusively on my own time, so when I go to New York in a few weeks, I'm on the 4pm flight, landing at midnight in Manhattan.

Do you work in game development? What's your opinion? Tell us in the Comments below.
Companies: Team Bondi

ghoti 29 Jul 2011 12:16
2/4
What he doesn't mention is that his job is just making things up and never facing any consequences for getting it wrong.
more comments below our sponsor's message

Now he is just looking for a smack to the teeth.... seriously what Developer in their right mind would take this prick's advice seriously? Developers deserved to be paid for the work that they do... simply put..

Ghoti above speaks the truth.. Prickhter is not even an accurate analyst and I believe the final insult to all of this was "No complaints, I'm extremely well-compensated."

Go S**t in your gold-plated toilet pachter and stay out of the spotlight... again... What.an.asshole.

wangxiang 7 Mar 2012 09:28
4/4
soccer cleats online store are items that you need in order to stay safe and to perform well on the soccer field. This is the reason why it is imperative for a player to make sure that his cleats give him the most comfortable feeling. In addition to this, other essential things which you should never forget when shopping for your adidas f50 adizero is efficient footing and the right pair which can help you have a proper hold over the soccer ball.
The first historical evidence of cheap soccer shoes was observed with the most unlikely player of all - King Henry VIII. King Henry VIII ordered Adidas F50 Soccer Cleats from the Great Wardrobe and wore them during football matches he played in 1526. The boots worn by the King were made from leather and were hand-stitched by the royal cordwainer, Cornelius Johnson. Each pair of boots cost King Henry VIII four shillings.
The shoes have become more comfortable and pretty much lighter than the old ones. The old shoes were made out of leather with wooden cleats and leather soles. The newer soccer shoes are made out of leather or synthetic material, plastic or rubber soles and the cleats can be plastic, rubber, aluminum and even rubber or plastic and with the end made out of aluminum. nike total 90 vapors are a series Nike made to speed up by reduce weight. Since 2004 nike mercurial vapor II, Nike always brains to make shoes light so that remain physical during match. Doctors have proved that some avoid pain usually happens when players exhausted. The light weight shoes can reduce injury during intense competition.
ü@ü@You want to send information to wearing red sole shoes? Do you want to show the world you are bold, daring and adventurous, or if you want a 2012 christian louboutin sale-soled shoes, because it is your favorite color? Maybe you like the idea of ??wearing a red dress, do not know how to include it you look like discount christian Louboutin christian louboutin red bottom shoes.
ü@ü@In recent times, Adidas has launched an intelligent football boot. The new f50 2012which is powered by miCoach is soon going to be a big hit in the market. It is accepted that this particular f50 adizero indoor will be called the "football boot with brain". This predator absolion trx is expected to bring smart technology into the field of play. Football is a game that has to be played fast with speed.