Warners and Team Bondi's Whore of the Orient - Some Details

The Warners' logo popped up on the Team Bondi site... Mad Max game also gets a mention 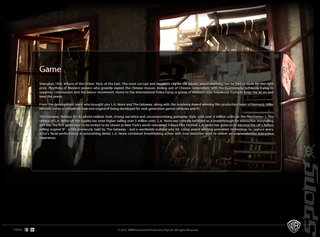 Back in November 2011 we reported on the Whore of the Orient, the next game from LA Noire developer Team Bondi... it looks as if Warner Bros have picked up the game.

Now, Thegamingvault is running with: "Team Bondi return with ‘Whore of the Orient’ for next-gen & PC". As headlines go, that one looks definitive. But let's look a bit more closely.

The copyright on the website is 2012. The text on the website states: "From the development team who brought you L.A. Noire and The Getaway, along with the Academy Award winning film production team of Kennedy Miller Mitchell comes a completely new and original IP being developed for next generation games consoles and PC."

Certainly looks good. And look, bottom left, a Warner Bros logo. It's got to looking locked on now! And now let's look at a report in the Australian Financial Review entitled 'George Miller’s new script" about the Aussie filmmaker responsible for Happy Feet and the new Mad Max: Fury Road movies; and also part of the Kennedy Miller Mitchell company mentioned on the Team Bondi site.

Mitchell states that, "What’s fascinating, though, is that Team Bondi immediately went to work on Happy Feet Two. People can move from a game to a movie and be completely at home, because it’s the same skills, process – the same game.”

Which is why, after resisting the impulse for years, and watching imitators clean up, Miller is now finally going to make Mad Max, the game. Backed by Warner Bros, the game version of Fury Road was to be made in Sweden, until Miller saw what Team Bondi could do. He has also acquired the rights to Team Bondi founder Brendan McNamara’s next game, Whore Of The Orient."

"Warner Bros is standing by, willing to do Fury Road; the incentive would bring it back here in a New York minute. It’s not immediately obvious but the potential in the video games sector is massive. Just from the statistics people are showing me, it’s a $60 billion industry fast-tracking towards $90 billion. And it’s not dominated by any particular country. Films are very expensive, so studios . . . are making drastically fewer of them, but much higher quality, and they invest in sequels, because they know that they’ve got an opening which they don’t have to buy with their marketing dollars as aggressively."

Warners! There... only there's one very sobering fact we haven't mentioned: the AFR piece that appears to confirm everything, came out in November 2011.

So, let's all breathe out for now. At best, the 2012 copyright on the Team Bondi site isa good sign but far more likely to refer to a 2013 Mad Max game than a 2012 Whore of the Orient.