Aims to "greatly exceed" his former self. 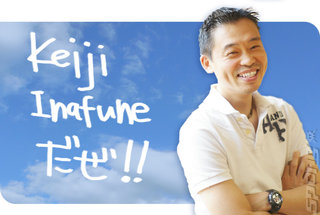 All Images (2) »
The former head of Research & Development and Online Business and Global Head of Production at Capcom, Keiji Inafune has launched a new development blog, following a rather messy departure from Capcom. In his introductory post, he says that he hopes to "greatly exceed my former self."

That's a lofty goal for the man who is credited with creating the Rock Man (Mega Man), Onimusha and Dead Rising series, among others. But, now that Inafune is free from his apparently former "communist state," he has plans to "challenge things that I couldn't do during my salaryman era."

Alongside his long-term goals, the producer also highlighted - in a vague sense - exactly what he wants to achieve from his new position. He'd "like to make games," apparently. Surprise surprise. But he says despite it being a bit of an obvious claim, he felt it was worth formally stating. Consoles, portables, social, online games... you name it, he wants to explore it.

Inafune even mentions that he would like the opportunity to dabble in manga, books, movies and other media when the time is right.

Today, the iconic developer has nothing to announce, but says he aims to reveal projects through his blog. Best keep an eye on it then.