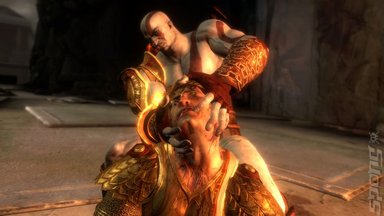 More sales figures! The North American monthlies are in, courtesy of data tracker NPD, and as expected God of War III smashed the competition throughout March 2010, with over 1.10m units sold.

Sony's recent marketing fortune with the PlayStation 3 appears to be paying dividends in the software chart in general, with four games for the console appearing in the Top 10. Final Fantasy XIII performed much better on the PS3 than the Xbox 360, achieving 3rd (828.2k sales) and 6th (493.9k) place respectively. Pokemon and Battlefield: Bad Company 2 filled the gaps.

NPD analyst Anita Frazier was certainly surprised. ?There were a lot of records and trends this month that were great to see. 8 of the top 10 software SKUs were new items this month, and many launched with considerable introduction month unit sales that were significantly larger than the last launch for the franchise...

?The PS3 platform contributed the most of all platforms to industry dollar sales performance, driven by stellar software sales. The two Pokemon SKUs combined to sell nearly 1.8 million units. There is just really so many good things to point out this month we're still uncovering them in the data.?

Hardware units were also up over last year's figures, with a seven percent sales rise over March 2009. When it came down to platform domination, Nintendo had the lead with the Nintendo DS taking top spot at 700.8k units, and the Wii following close behind with 557.5k units. The Xbox 360 came third with 338.4k consoles sold, and despite hardware shortages the PS3 managed to come a close fourth ? 313.9k units. The PSP (119.9k) and PS2 (118.3k) finished the platform chart.

Those software figures, in full below: