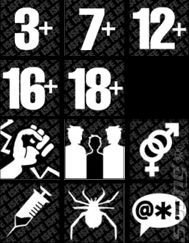 PEGI is set to become the sole ratings body for games in the UK, the government has announced. Further to that, it will now be illegal to sell a game rated 12 or over to an under-age customer.

The announcement was made by Creative Industries Minister, Siôn Simon, as part of the Digital Britain report published today.

The announcement noted that PEGI "will replace the current hybrid system that has two separate sets of symbols, either of which can appear on video games, and is sufficiently adaptable to work in the rapidly expanding online games market."

PEGI will no longer be voluntary - all games will need to be submitted for classification if they are to be sold in the UK.

The Video Standards Council will take a statutory role, "with a mandate to implement the PEGI classification system for all video games in the UK." The VSC will have the power to ban games.

The government says it will work with PEGI to create what appears to a new set of symbols and ratings. It will consist of five age categories and picture boxes describing the nature of the content such as bad language or violence. In the UK, PEGI categories currently consist of 3+, 7+, 12+, 16+ and 18+. Whether this will continue to be the case is not yet clear.

?Protecting children and giving parents a clear and robust new system has always been our starting point. The new system of classification follows the essential criteria set out by Professor Tanya Byron, who recommended a trustworthy, uniform and clear set of symbols that is flexible and future proof", said Creative Industries Minister, Siôn Simon.

?We will now work with PEGI and the VSC to agree exactly what the new symbols will look like and how they will work in the UK market, to ensure they provide the clarity and safeguards that are needed.

?The UK already has a robust system of classification for films and DVDs run by the BBFC. The new system of games classification will match those high standards as this important market continues to evolve?, Simon went on.

Tanya Byron offered her support for the move, commenting, ?In my review to Government I identified the need to improve the video games classification system. I identified some fundamental criteria including making games suitable for 12-year-olds and above subject to statutory control. I also said the system had to have child safety at its heart and have the ability to adapt to future challenges. All these criteria are important for ensuring that parents have the tools they need to make informed choices and keep their children safe.

Alasdair Fox 16 Jun 2009 16:04
1/2
It will be interesting to see if this has any impact, as many parents buy the games for their kids.
Just the other day I watched a mother buying her son (who looked around 7 years old) a copy of GTA IV, which is clearly marked as an 18, and does indeed contain a high level of violence and swearing. I love the game myself, but it's entirely unsuitable for a child of that age.
Will shop staff be willing to educate parents on the new rating system at the risk of a lost sale?

There's a relatively simple way for stores to protect themselves, if they fear repercussions, create a register that customers have to sign when purchasing a product that's over the legal limit confirming that they understand the legal implications of them passing it on to someone under the legal age; alongside that, you put up clear notices stating that refusal to sign the register indicates that you will not hold the store responsible for supplying the product.

Creates a win-win situation, you either accept that you are responsible for purchasing and supplying a product for someone under age, or you absolve the seller of responsibilty.