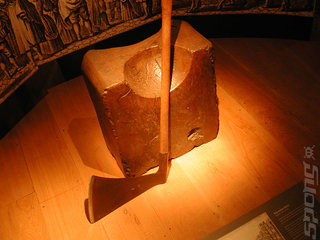 Image via sports complex.
Update: THQ has clarified what 'spinning out' two of its studios into independent companies entails. A company representative told SPOnG, "We will transfer ownership over to the current studio heads. They will continue to work on their current projects for THQ. They will now also be able to seek additional projects from THQ or other publishers."

THQ has confirmed that it will 'spin out' two of its studios into independent companies, while it will close another should a sale not be completed soon.

A statement from the company reads, "As part of THQ's previously announced business realignment and related headcount reduction plans that targeted cost reductions of $220 million, including a reduction in workforce of 600 people worldwide, THQ today notified the staff at two of its development studios that they will be spun out as independent companies: Heavy Iron in Los Angeles, CA, and Incinerator in Carlsbad, CA."

The phrase, "spun out as independent companies" is somewhat ambiguous. Does this mean a management buy out? Will THQ retain a holding? Or is it simply a euphemism for 'you guys keep the name and do your best'? SPOnG has contacted THQ for clarification, but no comment was available as of the time of publication.

"In addition, THQ informed the staff at its Big Huge Games studio in Timonium, MD, that it plans to close the studio if a sale is not completed in the near future. These actions were unfortunate but were necessitated by the difficult economic environment", the statement continues.

The move comes off the back of a series of cutbacks that THQ has said will result in a total of 600 lay-offs, representing a massive 24% of its workforce.

The company has suffered from poor financial results recently. Over the last three months of 2008 the company suffered a loss of $191.8 million.

Big Huge Games, which was only bought by THQ a little over a year ago, has worked on strategy series such as Age of Empires and Rise of Nations. Incinerator is the studio behind the Wii and PS2 versions of MX Vs. ATV Untamed as well as the tie-in to the Disney/Pixar movie, Cars. Heavy Iron, meanwhile, has worked on licensed properties such as WALL?E and Ratatouille.