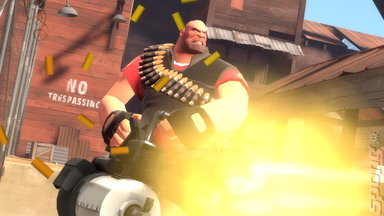 All Images (3) »
Valve has begun the countdown to the roll-out of 'The Heavy', a Team Fortress 2 update that it promises will be the biggest ever. Surprisingly, it is not about Scottish bitter beer... shocker.

Valve plans to unveil new information and screenshots daily over on its website. The first new details are in, with Valve describing the latest community map, CP_Steel. The bumpf runs as follows - "A complex Attack/Defence control point map, with some unique gameplay. Unlike most TF2 maps, capturing a control point modifies the layout of the map, opening and closing routes for each team. As a result, the offensive team has a wide variety of tactical choices around how they'd like to assault the final point.

"Should they use Scouts and Soldiers to rush the final point with only the routes they start with? Should they go for the side control points and open up more routes to the final? Should they capture extra points to shut down the defender's routes? The many choices keep the map interesting for a long time, providing a wide variety of experiences in a game."

'The Heavy' will include new unlockable weapons, achievements, maps and a whole new gameplay mode. Valve says it will be available next Tuesday "to all owners of Team Fortress 2".

To promote the new content Valve is also hosting a Team Fortress 2 Free Weekend via Steam, its online gaming platform.

You can keep abreast of what's coming in the update here.
Companies: Valve
Games: Team Fortress 2

It came with two solo games. Did you dislike them as well?

But the ghames worth it purly for pOrtal, like how i use the Capital O!