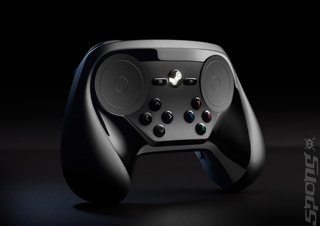 Steam's haptic controller will be out in "October or November" according to a report from PCGamesN.

The information comes from PAX East, with PCGamesN citing "a source in the hardware industry". The source also apparently reckons that, with the controller about good to go, the launch of Steam Machines won't be far behind. The report says that we should expect them before the end of the year.

The article also claims that 500 games will be supported by SteamOS by the time 2014's done with, up from the 382 currently supported.

The controller offers haptic feedback and touchpads in place of analogue sticks. It was also meant to feature a touch screen, but that was ditched in favour of the more traditional button set-up you can see in the image running with this story.