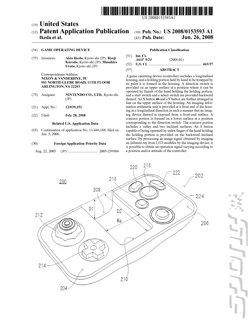 We love the US Patent Office - it's always full of surprises. Off we went today to look for the legendary Xbox 360 motion-sensing controller, which has apparently been revealed by Microsoft Games Studios' Ken Lobb and we discover a new Wii controller - pictured right.

Ken Lobb's apparent revelation of the 360 controller came in a form of words he used in a walk-through for IGN. "One of the things that the wrench is used for is to turn these devices. So you basically grab with the wrench and then you twist the controller around and it'll move different things in the game", said Ken.

We actually think he meant that you twist one of the standard controller's analog sticks. The rest of the Interweb appears to think that he meant one would twist the entire controller. We're happy to be proved wrong on this one. However, without a brand new controller - which you'd figure that IGN would have mentioned - it's unlikely.

The new controller is explained thus:

"A game operating device (controller) includes a longitudinal housing, and a holding portion held by hand to be wrapped by its palm it is formed in the housing. A direction switch is provided on an upper surface at a position where it can be operated by thumb of the hand holding the holding portion, and a start switch and a select switch are provided backward thereof.

"An X button 46 and a Y button are further arranged in line on the upper surface of the housing. An imaging information arithmetic unit is provided at a front end of the housing in a longitudinal direction in such a manner that an imaging device thereof is exposed from a front-end surface.

"By processing an image signal obtained by imaging an infrared ray from LED modules by the imaging device, it is possible to obtain an operation signal varying according to a position and/or attitude of the controller. "

So, like the Xbox 360 motion controller... it's possibly just a nice idea for the moment.

r4 revolution for ds 2 Oct 2009 12:05
1/1
This is not going to be like Wii Play because the game was basically $10 on top of the price of a Wiimote, making it a no-brainer instant impulse purchase for anyone in the market of buying a second Wiimote. Wii Sports and Wii Play has instantly understandable games like Bowling, Boxing, and Clay Shooting.