He's got a promotion! 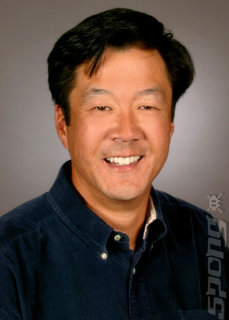 Not only does his new title have one more word than his old one did, it is indeed a brand new role created for him.

According to Microsoft, "After spending four and a half years leading the transformation of Microsoft Game Studios into a world-class entertainment publisher, Kim will now explore new growth opportunities with partners across all parts of the global Interactive Entertainment Business.

"His focus will be on future external relationships and partnerships, as well as developing growth strategies for the entire business."

So, third-party relations manager then. Good on you Shane - we thought you were in line for big things having done a great deal of talking to the public in recent months.

Microsoft also points out that Phil Spencer, "a Microsoft Game Studios veteran for six years, will assume leadership of all first-party development and publishing efforts worldwide. Both leaders will report directly to Don Mattrick, senior vice president of the Interactive Entertainment Business."

In related Microsoft news, Jeff Bell (corporate vice president of Global Marketing for Microsoft's Interactive Entertainment Business) is leaving. In his words, "The time is right for me to pursue my life's passion of consumer brand marketing and the creative and services that drive it". No, seriously, he said that - you can read it here.
Companies: Microsoft Microsoft Game Studios
People: Shane Kim