Will Wright: I Distrust Focus Groups

If a game idea is horrible, he likes it. 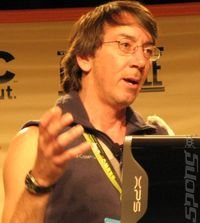 Will Wright: Excellent fellow.
In an industry that is sinking further and further into the mire of corpo-speak by the day, it's refreshing when a stone-cold gaming innovator comes out in public and says:

"That's when I learned not to trust focus groups," says Wright. "I'm more suspicious when somebody says, 'That's a great idea!' than when they start pushing back and say, 'That's a horrible idea!', because if they say it's a horrible idea, then I know it's unexplored territory.""

Will Wright is the innovator and he was speaking about initial focus group reaction to the idea of The Sims - it was uniformly negative. His reaction is also speaks highly of Electronic Arts which, despite the negativity, supported the game and reaped the rewards.

Wright was speaking to the Vancouver Sun newspaper as he was in town to speak at Vancouver Art Gallery's Krazy! The Delirious World of Anime + Comics + Video Games + Art exhibition.

While not mentioning Spore at all, he did explain his motivation for game creation - and George Lucas popped up once again.

"I found I had a lot more fun building these things than I did blowing them up.

"I want to show average people who don't think they're creative that they can create a world as elaborate as George Lucas."

While SPOnG's still mildly miffed at Lucas for the whole Star Wars I to III thing, we've got to applaud Will Wright for taking the path of most resistance.
[url=http://spong.com/game/11040033]
Spore[/url] is due out in September this year.

Kill people who are going to part of a focus group...that will deter everyone.

You forgot Kingdom of the Crystal.. oh I can't even bring myself to finish it.