Outpourings of Love as Will Wright Talks SimCity 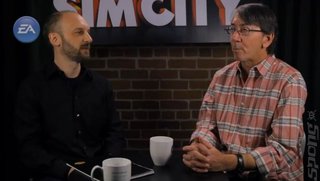 Sim City was invented many, many, many, many, many years ago in videogames history by Will Wright as a tool for world domination. Will then decided to do other things, such as the highly hyped 'That Game About Evolution'♥. Well, someone at EA remembered this invention and invited Mr Wright back to talk about the new version.

He really, really likes it. He says so in this video. He doesn't go into how the royalty payments and other fiscal structures work out, but he really, really, really likes SimCity v.2013. He does this at a very, very nervous looking man called Stone Librande who, according to the blurb, "turns the tables on Will Wright and asks him about how he builds his cities."

Let's all pretend that this isn't all staged and is in fact a totally natural outpouring of genuine love...