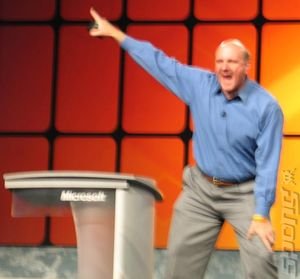 "We've already been working on, for example, in Windows, device driver support for Blu-ray drives and the like, and I think the world moves on. Toshiba has moved on. We've moved on, and we'll support Blu-ray in ways that make sense."
*

That's a relief, as a nonsense Blu-ray device in Microsoft products would... make no sense. Much like the apparent lack of communication within the Microsoft camp. In London this week, Microsoft responded to a Financial Times' question regarding the company's dialogue with Sony over Blu-ray. According to the FT, Sony Electronics (US) CEO, Stan Glasgow, confirmed that Microsoft and Sony are in talks over a Blu-ray drive for Xbox 360.

Microsoft, then (Thursday) had different ideas, stating, "We have made no such announcement. Games are what are driving consumers to purchase game consoles and we remain focused on providing the largest library of blockbuster games available."

We await the drive with more breath bated.

SuperSaiyan4 7 Mar 2008 11:30
1/14
Well Microsoft will have to go blu-ray they have no choice, the consumer has no choice only blu-ray exists now as the high def format.

We know for sure that in the next gen consoles after this the next Xbox will definently have a blu-ray drive built in.

I mean its like with Nintendo, whilst everyone went onto CD's they were still doing cartridges, everyone went DVD they went for them tiny little dvd discs.

PS2 helped the DVD but then there was no format fighting against DVD really like beta max and vhs or like recently.

So we have one format and blu-ray will replace DVD since the quality and space is far greater than DVD which is a fact.

I doubt that Microsoft will ever put a blu-ray drive in this gen's Xbox 360 even though if you look at the 2 Japanese RPG's released like blue dragon and lost odyssey more space is needed but the problem is blu-ray is slow at present at reading data and requires installation onto the hard drive to minimise loading times and thats what Microsoft did not want to do.

Microsoft has clearly made mistakes by not taking risks but Sony has taken those risks and its paid off for them.

If you look at some of the screens of FF13 they of course look mindblowing than any of the RPG's on the 360 but thats only 1 game and its taking ages to come out but am sure it will use up a lot of space on the disc.

Tim Smith 7 Mar 2008 11:51
2/14
SuperSaiyan4 wrote:
We know for sure that in the next gen consoles after this the next Xbox will definently have a blu-ray drive built in.

SuperSaiyan4 wrote:
Microsoft has clearly made mistakes by not taking risks but Sony has taken those risks and its paid off for them.

Good on you SS4 - it that's who you really are.

Now, if only she could learn to write things that are a) interesting, b) amusing or c) well-written (and not riddled with grammatical errors) we may be getting somewhere. None out of three is bad, and punctuation was invented for a reason.

what it is over, jebus its even more boring now!

tyrion 7 Mar 2008 13:12
6/14
SuperSaiyan4 wrote:
PS2 helped the DVD but then there was no format fighting against DVD really like beta max and vhs or like recently.
Actually, Sony had a competing format then too, but they merged with DVD before a "war" started.

SuperSaiyan4 wrote:
the problem is blu-ray is slow at present at reading data
I've heard that the PS3's Blu-ray drive is faster at reading a single layer than the 360's DVD drive is at reading a dual layer disc (this may only be for the 2nd layer) so when multi-platform games are larger than 4.5GB, the PS3 version should load faster.

oldest gamer 7 Mar 2008 13:15
7/14
So M$ confirms what all us consumers new, they would have to support the winning format choosen by consumers. Too bad they ignored consumers on including HDMI, wireless netwroking, re-charging constrollers, re-usable accessories like Blue Tooth and USB. But then again M$ lost so much money last gen they need to make it this gen off of 'accessories'. 100 mb drive for $200 anyone?

Come on man, it's the internet your using here :-P Make the most of it.

deleted 7 Mar 2008 14:26
10/14
Horatio wrote:
haritori wrote:
tyrion wrote:
Actually, Sony had a competing format then too, but they merged with DVD before a "war" started.

Come on man, it's the internet your using here :-P Make the most of it.

well i did do that but tyrion is a source of information that outdoes wiki most times, and i wanted to Sylar his info! and the only info wiki has is that Philips and Sony abandoned their MultiMedia Compact Disc.

But i found this http://www.ce.org/Press/CEA_Pubs/929.asp if anyone else is interested.

Its Fun To Learn!!

The Blu Ray association Strategy - seems to want to keep the prices high on players and the dics themselves, and im kind of ashamed of microsoft for not really putting a 100% support behind HD DVD to begin with, it just seems they seen the way the winds blowing and thought what the hell. I think toshiba deserved more from microsoft.

The problem with Blu Ray now is speed access. Such a slow speed will cause a lot of install problems in the future for PS3.

I too wanted HD DVD to win, as things would have been so different if MS back HD DVD over normal DVD.

However and in an ironic way, 360 is testament that you can still create great games on the DVD format, if you are prepared to try hard enough. Sometimes I think developers are like spoiled children who fail to work within limits (yes, you too Hideo Kojima recently, on PS3 Blu Ray discs limits). In the same regard, Wii does the same kind of thing with DVD, but also with its graphics.

A true artist can work within/out limits. One things for sure, while the format war might be over, the battle of creativity in using what's available is just starting (with many talent homebrew/modders etc, reading to test the big boys.

tyrion 7 Mar 2008 19:34
13/14
haritori wrote:
well i did do that but tyrion is a source of information that outdoes wiki most times, and i wanted to Sylar his info!
Leave my brain alone!

Actually, I feel as if if I should be flattered.

Dylan 8 Mar 2008 11:17
14/14
The stupidist thing sony could do from a buisness prespective would be to give microsoft the right to use bluray on xbox 360 or even the 720 if as anaylisits are pridiciting will come out in 2011 because the money sony would drive from having a console wining the "console war" would outweigh the money they get from microsofts for blu ray drives. Not only is the better quality of blu ray a factor but storage is to considering Hideo Kojima's coments this week about MGS4 not being able to be stored on a blu ray disk (not sure if it' a 50gb or a 25gb ethier way DVD stills only 4GB) as game developers start making more complicated games there going to need more space. look at the difference between the first ps2 games and some of the later ones. know imagine if the developers had another 46gig to play with. Once developers get around the difficulties of developing for ps3 are they going to use a dvd disk restricting them to 4gig or will they use the blu ray disk potenially opening up pandoras box of gaming.
Posting of new comments is now locked for this page.