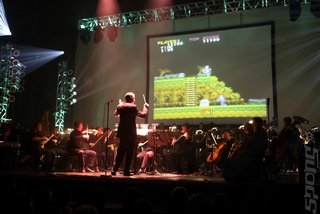 The gaming music concert attracted a wide mix of hardcore gamers (cosplayers were spotted hovering around the tube station at midnight!) and older Classic FM listeners ? many of whom were keen to queue for some time after the event at the ?meet and greet? to grab a few seconds with the composers and musicians behind their favourite game scores.

Most impressively, Video Games Live was also the first time the venue has sold out since its recent refurbishment ? a superb start to London Games Festival this week.

VGL co-creator Tommy Tallarico declared the London Philharmonia Orchestra to be the best bunch of classical musicians they have had to date. The orchestra banged out the rousing tunes from Metal Gear Solid, Sonic the Hedgehog, BioShock, Civilization IV, Tron, Final Fantasy VIII ? "Liberi Fatali" , Super Mario Brothers and The Legend of Zelda, among others.

Personal highlights for SPOnG were Richard Jacques Outrun remixes and the Chrono Cross piece performed by the virtuoso ?videogames pianist? Martin Leung. If you have not yet seen Leung's work on YouTube, we urge you to watch and listen to it immediately.

The emotional response of the crowd to the music, with the audience whooping and cheering along, was certainly something rarely seen at classical concerts on the South Bank

Video Games Live recently announced 25 new shows scheduled for later in 2007 and through into 2008. If you get a chance to catch one at a concert venue near you, SPOnG urges you to go.

Stay tuned for more from London Games Week, with the industry beginning to get excited in the build up to tonight?s British Academy Video Games Awards. Right now, SPOnG is off to the dry cleaners and the barbers to smarten up our act before we head down to the ceremony later today!