Nottingham, UK to host Richard Jacques gig, Into the Pixel and more. 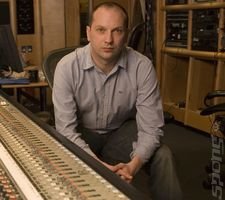 Jacques at his (mixing) desk
Saturday, October 28 is a date for the most eager of SEGA fans? diaries, as the UK plays host to game music legend Richard Jacques as part of GameCity 2006, an independent festival of interactive entertainment taking place in Nottingham this October.

The award-winning composer of music from the likes of Pursuit Force and Headhunter Redemption is the main attraction on the afternoon of the 28th at St Mary?s Church in the Lace Market, where the audience will be treated to a selection of famous musical works. The setlist is under wraps for the time being, but it's been made public that specially arranged pieces from OutRun, Shenmue improvisations and a Sonic the Hedgehog medley are on the cards.

Jacques himself is looking forward to it a lot: "I'm really excited to be appearing at GameCity and highlight the role of music in videogames. It's a rare event that makes game culture truly accessible to the public, but it's so important that it's done. I can't wait." The supporting bill for the concert is to be announced, but it?s quite a coup for the organisers to get someone of Jacques? standing. If you?re not entirely familiar with his work, have a look at Jacques? website, turn up the volume, and be impressed.

Running from October 25-29, GameCity 2006, as the press release goes, is a ?...unique and wholly public-facing platform. It provides a place for players, developers and the curious to come together across a city. Mainly, it's about trying to find out what a videogame festival could be.?

The official site for GameCity also states that other events include 16 screenings of unreleased titles, an arcade trail of retro gaming, a documentary premiere, and the first appearance outside the USA of the Into the Pixel exhibition of video game art that so impressed us while we were at E3 last May.
Companies: SEGA
People: Richard Jacques

Glad to see that Into the Pixel art thing coming to the u.k. Hope there is some good developer game art in there.