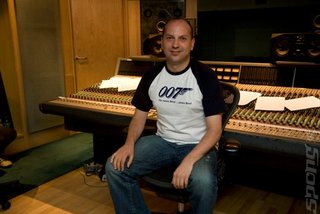 Award-winning composer Richard Jacques has lamented the continued support by developers and hardware manufacturers to offer an option to switch off the music in computer games.

Speaking at the Ear Candy discussion panel at the Barbican Art Gallery last night alongside Wing Commander and Theme Park composer James Hannigan, Jacques - famous for his scores in Headhunter and 007: Blood Stone - explained the why such an option exists in the first place, but now sees it as a creative hindrance.

"The historical answer [to including an option to turn off music] is that it was a technical requirement back in the early days, where people were testing software and had to turn it off to listen to sound effects," Jacques explained, before turning attention to the Xbox 360's Custom Soundtrack feature.

"I don't know what Microsoft's... I'd like to know what their real reason is to still have that option, to remove the disc from the console and put in any music [the player] wants. I can understand it for some games, like racing games - the soundtrack is essentially a jukebox.

"But actually removing an integral part of the game experience and having that replaced with something completely inappropriate for the story and environment... you know, a film director would have a heart attack if viewers were removing the score he worked so closely with the composer on. I think it's absolutely ridiculous, personally."

Do you still use the Custom Soundtracks option on the PS3 and Xbox 360? What games do you use it for, and for what reason? Let us know in the forum below.
Companies: Microsoft
People: Richard Jacques

John Elliott 19 May 2011 11:09
1/8
The last time I used a Custom Soundtrack was back in Halo 3 I believe, the game gave me a warning that using the Custom soundtrack will remove the in game music and remove some of the immersion, or something like that.

As for custom soundtracks, I usually just use my PC to play music while I'm playing Multiplayer (As MP rarely has music), the Xbox music player barely gets any use from me.

I remember ssx....had awesome music (like Red hot chilli peppers and Felix da housecat) when you went up in the air (to pull off some awesome tricks) the bass cutt out...and when you landed again...the bass would slam back in!.....Now that was game music genius!

games like Halo Rach have amzing work put into the soundtrack and enhance the gameplay!

Cfan 19 May 2011 11:30
3/8
Ok, say you had a game you loved and wanted to keep replaying it but when the same music starts to grate you stop playing. you'd prefer that then Rich?

Streaming music through the 360 is one of my favourite features of the console.
When Skyrim hits, I'll prolly listen to the soundtrack for the first 30 hours or so, then it will be replaced by my own choice.

Alfredzzzzzz 19 May 2011 12:32
4/8
Riding on the beautiful panorama that Red Dead Redemption offer with Ennio Morricone's songs is better than the four tracks they put on the game!

JanetPlanet 19 May 2011 15:33
6/8
I went to this talk last night at the barbican... It was excellent. Jacques and Hannigan were interesting on the history of music in games.

realvictory 19 May 2011 18:18
7/8
Anyone can just turn the sound off on the TV and play music on any other device while playing a game. Whether Microsoft lets you do it on the same device at the same time is irrelevant.

If you want people to listen to your game's music, make music that causes people to notice the experience is improved with it. Even so, people prefer different things - why prevent them listening to their own music on the same device if they would and could do it on different devices regardless?