Taito makes its way onto PlayStation 2 with sweet driving sim 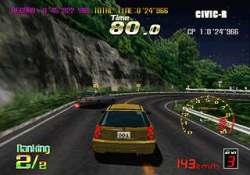 All Images (2) »
Taito of Japan has announced that it will be releasing Battle Gear 2 for PlayStation 2 this summer.

Taito has gone for an all out approach and has included full support for the PlayStation 2?s list of upcoming peripherals. For a start, the game will be online using the USB modem ME65PS2 OnlineStation. This will allow full online real-time competition play across all territories. Battle Gear 2 will also make use of the PlayStation 2?s force feedback steering wheel and i-Link cable for battle games.

There will be over 30 cars included, all of which have been officially licensed and laser scanned, from manufacturers including Honda, Mazda, Mitsubishi, Nissan, Subaru and Toyota.