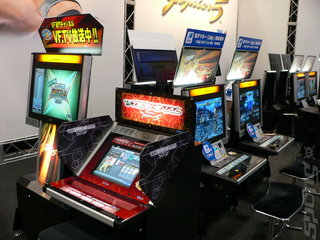 Virtua Fighter 5: SEGA fights back.
All Images (5) »
By Kevin Williams

We continue our monthly coverage of the international amusement scene for SPOnG with the latest run-down of the new releases.

Last months arcade coverage looked at amusement based cross-over products, but the popularity of consumer gaming is nothing to the success of a good driver, fighter or a BeMani title in the surviving amusement sector.

The amusement scene has received a major injection of interest internationally with Namco Bandai Games announcement of Tekken 6 AC making the move back to amusement; this release is the most influential amusement title of the current phase on gaming.

The preview of video footage at the AOU show from the arcade Tekken 6 also brings news that a coin-op version of the PlayStation 3 is to power the brawler - as with other amusement applications of the PS (System 11), and PS2 (System 246), the arcade version will see an over-clocked version of the consumer hardware customized for arcade application.

The appearance of Tekken 6 on the PS3 hardware, has also offered an impetus to Namco?s competitor, SEGA. The Japanese giant had received fan criticism for not releasing an international version of the arcade Virtua Fighter 5. Phenomenally popular in Japan, the tournament-enabled game is deemed too expensive and complicated to risk on a US or European release. With the news that Tekken 6 will be seeing international release (supporting the consumer PS3 release of the title) SEGA could have its hand forced.

Arcade games like Tekken support a regeneration of video amusement in Asia, complemented by titles such as Afterburner Climax SD. The air combat game for the 80s is re-released for current generations - intense graphics supplied by the LindBergh arcade hardware, but also a radical cockpit system on the deluxe cabinets that offered full motion to support the high-speed graphics.

But not all amusement is re-hashed past glories. The R&D teams of prominent developers have been working hard on redeveloping the arcade experience to meet a more savvy market.

SEGA has launched in Japan the unusually named 2 Spicy, a shooter that brings the enjoyment of a two-player brawler to the genre of gun games. The Time Crisis duck-pedal taken one step further with the ability to duck to the left or right. A game that has cybernetic hitmen duelling within claustrophobic arenas blasting at networked opponents. A totally immersive shooter with hidden depth that pips even the Nintendo Wii to the post regarding physicality.

Finally, Konami Digital Entertainment (KDE) celebrates the BeMani Tenth Anniversary, BeatMania launched in 1997. 2007 has seen the launch of Dance Dance Revolution: SuperNOVA 2? that brings the concept full circle. The music beat amusement franchise touching every part of amusement and an evergreen money-maker. In this changing sector recent financial figures made a lie of those who claimed the arcade business dead - with the sales and operation numbers offering a much rosier up-turn than their consumer sales equivalent in the Asian scene.

How this will apply to the international sector and some more of what we can expect is covered in the next feature.


About the author: Kevin Williams is founder and director of the out-of-home leisure entertainment consultancy KWP Limited. His extensive years in the global video amusement and hi-tech attractions industry includes top management and design posts, with special focus on new technology development and applications. A well-known speaker on the industry and its technology, he pens an extensive number of articles. Founder and publisher of The Stinger Report - a popular industry e-Newsletter and web-based information service.