Girl Gamers And Will Wright Teach The Facts

And Will is the new Bono... 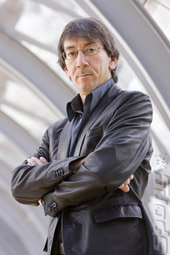 Photo courtesy of EA
As well as confirming that ambient music guru (and feather-wearing Bowie producer) Brian Eno will be producing the soundtrack for the highly-anticipated Spore, Will Wright has been announced as a keynote speaker at the ScreenBurn Fest in Austin, Texas on Tuesday March 13th.

ScreenBurn seems pretty excited to have him on board, labelling him "the Bono of the video game industry". SPOnG's not entirely convinced that's not libellous.

Other gaming highlights include such panels as:

'Girl Video Gamers Teach You the Facts About Successful Marketing'

'ARG! The Attack of The Alternate Reality Games'.

According to the organisers:
"The second annual ScreenBurn Festival enables consumers and game developers to preview the future of this industry, hear about soon-to-be-released titles, learn fascinating insights from thought-provoking experts, plus meet up-and-coming new talent whose innovations are powering the next generation of play."

ScreenBurn became part of the South By South West (SXSW) 'Interactive' conference - which centres on discussions of web design, usability, and blogging to wireless innovation and new technology business models - just last year. The notion of a conference not being interactive could also be one of the areas under discussion... or not.

SXSW Interactive Event Director Hugh Forrest is apparently bubbling over with excitement, commenting that, "The video game industry continues to grow - and there are some great tie-ins here with the different kinds of things we do at SXSW. I am confident that ScreenBurn will help bring even more energy to SXSW."

SPOnG hopes it goes well. That said, following the Slamdance/Columbine controversy we're a bit dubious about mainstream festivals and conferences that decide gaming's the next big thing.

stop knocking u2s music. the politilcs and stuff are another - booooooring - thing but u2 rock.