Could it challenge the DS and PSP? 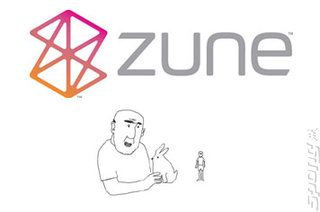 Microsoft?s iPod-smasher (stop laughing at the back), Zune, will play games by July 2008 according to new reports. This could make the Zune Microsoft's first actual? entry into the hand-held gaming market. It?s now a DS/PSP-smasher (we said stop laughing, or you can leave). The introduction of strong games functionality could prove vital in increasing Zune's sales performance.

Microsoft vice president of marketing and publishing Peter Moore confirmed the plan at CES yesterday. He told reporters that the Zune's large screen will offer a better way to play games. Then in an admission that will shake the foundations of? no one, he over-effused in a manner beloved of Steve Balmer: "I love the interface, I love the screen,'' he said over dinner at the show - omitting, of course, to say, ?I love my job!?.

What he didn't specify is what kind of games the Zune, which is compatible with the 360, will play. It has yet to be confirmed whether the music player will enter the realms of "proper" gaming. Alternatively, it could serve as a platform for casual games.

Likewise, no mention has been given as to whether a more powerful Zune will be released to handle games graphically on a par with the PSP and DS. Microsoft's other option would be to update the current Zune with firmware.

The Zune has performed poorly so far, selling "hundreds of thousands" according to Microsoft?s President, Entertainment and Devices Division, Robbie Bach. Microsoft expects to sell one-million units by June 30th. Compared with iPod's estimated sales of 17-million in just the fourth quarter; and according to analysts Merrill Lynch this is a fairly poor showing.

?Of course we don?t count ?Project Origami? because it never happened.

conversly, how long till we see images of iphones poping up online with nothing but that sad mac icon on them?

Does os-X still have that? Always made me laugh when 1/4 of the entire mac lab at college was sad faces. hehe
______