Become Bolt, an agent for a laboratory investigating ancient technology and controller of the lovable and highly versatile Tokobots. 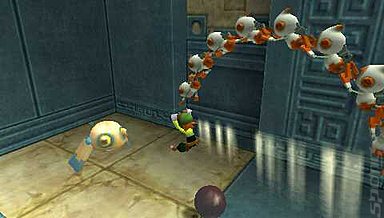 Tokobot, Tecmo?s first game for the PSP, is whimsical and wonderfully quirky. The storyline begins thousands of years ago, in the land of Moritari, where a prehistoric race created extraordinary technology that revolutionized life. Now, in modern times, this lost technology is being excavated from the ruins of the ancients by private labratories. However, the rediscovery of mini mechanised helpers, called Tokobots, has sparked interest from treasure hunters who plan to use the robots? powers to take over the world. It?s up to our hero, Bolt, to foil their evil plan.

Players begin with just six Tokobots but, as the difficulty ramps up, the player will have to seek out extra robots in order to deal with the increasingly complex problems. Tokobots are able to generate ?joint actions? ? a fusing together with Bolt to create ladders, swings and gliders ? and can unify in Karakuri Combinations. Call one of these into action and watch your Tokobots merge and become a larger, much more powerful or more useful robot - such as the sword wielding samurai or block lifting crane.

The game also features a Time Attack mode once the player has completed the Story mode, as well as a selection of highly engaging mini games. The combined effect is a unique, fun and compelling gaming experience that can be played anywhere and at any time.

?Tokobot is a fantastic first title for the PSP from Tecmo,? said James Ellingford, International Managing Director of Take-Two Interactive Software. ?We?re delighted to continue our work with Tecmo and are confident Tokobot will find favour with the PSP?s already impressive install base.?