Battle Rei Kurosawa's nightmares,unravel the sinister mysteries of the House Of Sleep in the third instalment of the acclaimed horror series. 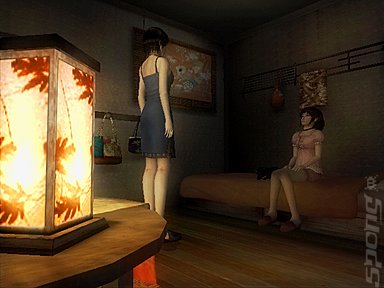 Setting a new benchmark for psychological horror; Project Zero 3TM: The Tormented immerses players in the tormented life of new character Rei Kurosawa, a cursed young woman tortured by guilt and plagued by dreams that blur the lines between reality and nightmares. Haunted by a vision of her dead fianc?e, Rei is disturbed to discover a mysterious tattoo is spreading across her body. Where did it come from? What does it mean? Discovering the truth will take players on a nail-biting journey through one of the most terrifying video games ever created.

Further refining the gameplay that has already won over legions of fans of the series worldwide, Project Zero 3TM: The Tormented features three playable characters, each with their own special abilities that need to be utilised to complete each nerve-jangling mission. The engrossing storyline and the increasingly disorientating flux between Rei's two states of reality - real life and nightmares - creates an unprecedented sense of uneasiness and fear. Evolved ghosts mean that the players' fight is more terrifying than ever, with spooks morphing into even more frightening shapes in front of their eyes.

Using the enchanted Camera Obscura to fight deadly ghosts and to solve the mystery of the tattoo, Rei must lift the curse that has befallen her. Assisting Rei is Kei Amakura, a young journalist who helps Rei piece together the puzzles contained in the haunted 'House of Sleep'. Players of the original Project Zero will also welcome the return of Miku as a playable character and revel in new insight into her personal story.

Commenting on the European publishing agreement, James Ellingford, International Managing Director of Take-Two Interactive Software said, "We are delighted to be working with Tecmo, a widely respected and influential game developer. I have no doubt that gamers across Europe will be as thrilled by Project Zero 3: The Tormented as we are."