Football Manager Does the Treble! 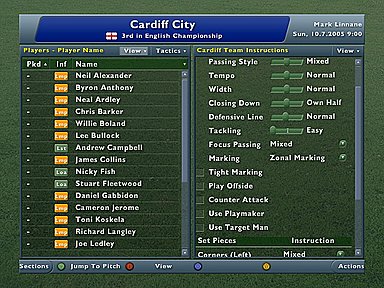 ?Finally a home console system is being released that can do Football Manager justice?, comments Miles Jacobson, Managing Director of Sports Interactive. ?We promise the most in-depth console management experience ever! ?

?It?s only fitting that the most powerful games console in the market has the most popular and powerful football management game? commented Matt Woodley, Creative Director of SEGA ?I?m particularly impressed by the way SI have re-designed the interface and controls to make it Xbox 360 perfect?.

At last, gamers of the console persuasion will be able to enjoy football management like never before! Football Manager 2006 for Xbox 360 weaves its way past the opposition and slots one in the back of the net to complete the treble line-up for this season. With hundreds of divisions across 50 countries, 250,000 players and staff, the degree of depth is undeniable for even the most vocal of rival managers!

All features from Football Manager will be incorporated, including training, the 2D match engine, full rules for all leagues and player data which will be accurate to the end of the winter transfer window. Football Manager once again has produced the super tactics to trounce the league and retain its crown as champion of management sims!