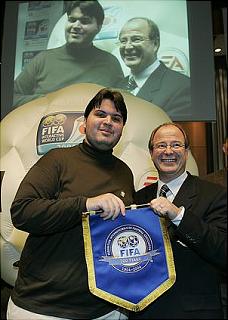 The first ever FIFA Interactive World Cup reached its ultimate climax on Sunday at FIFA House, Zurich, as eight finalists from all over the world competed on the virtual football pitch to become the overall winner of this video game tournament featuring Electronic Arts' FIFA Football 2005 on Xbox. After a determined and skilled performance, Thiago Carrico de Azevedo, 21, of Rio de Janeiro, Brazil, defeated Matija Biljeskovic, 21, Rockford, Illinois, USA to take the coveted title of the inaugural FIFA Interactive World Player 2004.

With an impenetrable defence and an explosive attack, de Azevedo, playing as the French National Team squad took second place in a competitive group featuring players from the UK, South Africa and Sydney. Following the group matches, the young Brazilian overcame a powerful South Korean opponent playing as the England National Team 3-2 in a semi-final match that left the crowd literally on their feet.

Following his victory over the South Korean, Thiago Carrico de Azevedo battled the US winner, Matija Biljeskovic, who earned his place in the final by defeating the best gamers from Korea, Berlin and Paris, in front of media, sponsors and key FIFA executives including FIFA General Secretary Urs Linsi. The final match featured intense defensive play from both sides as neither opponent was willing to give up the first goal. De Azevedo eventually took the upper-hand, scoring from a beautiful header late in the first half. The lead was his for the rest of the game and Thiago Carrico de Azevedo eventually defeated Biljeskovic's determined AC Milan team 2-1 for the title of FIFA Interactive World Player 2004.

"The final match against Matija was as tough a match as I have played", said Thiago Carrico de Azevedo. "We both were determined to play a tough defensive style and I was fortunate that my goalkeeper played so well. I'd like to thank FIFA, EA SPORTS and Xbox for treating me to an experience that I will never forget."

"Congratulations to Thiago Carrico de Azevedo who beat fierce competition to become the first ever FIFA Interactive World Player" said Clive Downie, EA European Marketing Director. "The tournament's fantastic global success is testament to the strong partnership between FIFA, EA and Xbox. We are thrilled with the support and positive responses from football gamers across the world who relished the chance to knock out the competition and rise to the top of the interactive league."

"It's been fantastic to see players from all over the world get so much enjoyment from playing EA's FIFA Football 2005 on Xbox and also qualifying via our online gaming service, Xbox Live, which now has a growing community of over one million members. Xbox Live members can't get enough of the game." said Michel Cassius, Senior Director, Xbox Platform and Marketing. "Next year the FIFA Interactive World Cup is just going to get bigger and better"

The tournament has inspired huge excitement with 8,000 players and spectators visiting tournaments all over the world, drinking 16,000 bottles of Coca Cola, playing over 3,000 games of EA's FIFA Football 2005 and scoring more than 6,500 goals. The highest score in one game was 6-1 in the semi final at the Berlin Regional Tournament. The online enthusiasm on Xbox Live has also beaten all expectations with one member playing over 1,228 matches so far, while another player scored over 3,800 goals and one has achieved an unbeaten streak of over 200 games.

The FIFA Interactive World Cup is the world's first-ever video game tournament, combining both on- and off-line football gaming action on EA's FIFA Football 2005 on Xbox and Xbox Live. The best football video gamers in Europe poured in to eight Regional Tournaments across six continents between October and December to test their skills in knockout matches of FIFA Football 2005 in the hope of winning the amazing trip to Zurich. Full tournament results and pictures can be found at http://www.FIFAinteractiveworldcup.com or www.xbox.com
Companies: Electronic Arts
People: Clive Downie
Games: FIFA Football 2005