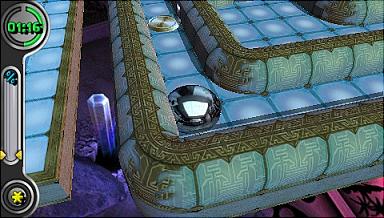 Available as a PSP launch title, Mercury is a refreshingly unique game with roots in many genres.

Mercury provides an addicting challenge through its simple gaming mechanic, which merely requires players to ‘tilt’ each level in order to manoeuvre the blobs of mercury, with various switches, platforms, obstacles and hazards standing between level goals.

Powering Mercury is a ridiculously sophisticated engine which calculates every gloopy part of the liquid metal as it bends and melds around everything in its path. As the digitised mercury smoothly ebbs and flows under such simple controls, players experience the purest form of gaming imaginable.

Despite requiring no complicated controls, the game itself is grinningly taxing. Puzzle elements vary from needing to split the mercury into several coloured component parts – each of which will be affected by the degree of tilt – in order to open gates, activate switches, etc. The maze-like environments require lateral thinking in order to navigate the mercury from start to finish – with the sprawling 3D levels often requiring devilish-yet-hit-yourself-when-you-work-it-out solutions.

“Without exception, everyone who has seen the early versions of Mercury behind the scenes has immediately loved it,” reveals Archer Maclean, Awesome Studios. “It’s an incredible game which will define a new genre. Coding it to run this fast has been staggeringly complicated, yet the results are hugely impressive. We’re delighted to be able to work with Sony Computer Entertainment in making this a PSP launch title. It’s just perfect for the format.”

“Mercury is going to be huge,” concludes Vijay Chadha, managing director, Ignition Entertainment. “It’s quite simply one of the most brilliant ideas for a game we have ever seen.”