Football Manager 2005 to debut at EIGF

Scottish football fans in for a rare treat as Football Manager 2005 is set to make public debut at this year?s Edinburgh International Games Festival. 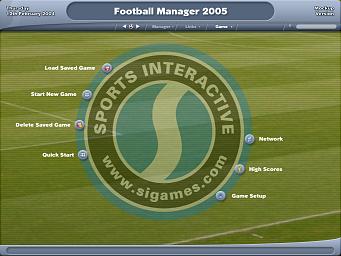 Visitors to Edinburgh in August of this year will have a chance to experience more than just the usual Festival fare of cutting-edge comedy and improbable street theatre, as Scotland's capital city will also play host to one of the most exciting events in this year's gaming calendar... the first public unveiling of Football Manager 2005.

As a part of the Edinburgh International Games Festival (EIGF), Sports Interactive's Managing Director, Miles Jacobson, will present a 'screening' of the company's eagerly-awaited football management simulation. This unique event will take place at Edinburgh's Odeon cinema on Lothian Road at 7.00pm on the evening of Friday, August 13th.

"The closer we've come to completing this game, the more we've realised that we have something really special on our hands," says Jacobson. "We thought it would be good to do something equally special to unveil the game to the public and this EIGF screening fits the bill perfectly. Attendees at the Festival will be the first to see what will hopefully be a big part of football fans' lives for many years to come."

Admission to the screening of Football Manager 2005 will be strictly limited to the first 220 members of the public who purchase tickets through either the EIGF or Odeon websites (www.eigf.co.uk and www.odeon.co.uk) or by calling the ticket office on 0871 554 4007. Tickets are priced at Ł4, with a concession rate of Ł3.00 for OAPS, students and children under the age of 14.

Football Manager 2005 is the first new soccer management simulation from Sports Interactive, the creator of the best-selling Championship Manager series, since the expiry of its long-term agreement with the software publisher Eidos in September 2003. Sports Interactive signed a five-year publishing deal with the international game-publishing giant SEGA in February of this year and recently released its first non-football title, NHLTM Eastside Hockey Manager, under that agreement.

Football Manager 2005 will be published by SEGA in the final quarter of 2004. Further information is available from the Sports Interactive website, www.sigames.com.