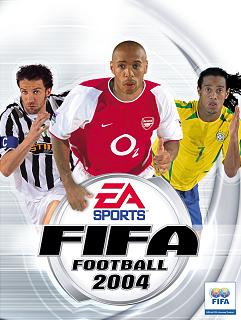 Arsenal striker and PFA footballer of the year, Thierry Henry, will link up with Alessandro Del Piero, captain of Italian Seira A champions Juventus, and FIFA World Cup winner and recent Barcelona signing, Ronaldhino, to provide EA SPORTS with the ultimate dream team of football talent. All three players will participate in the pan-European marketing and TV campaign due to be unveiled in October.

The FIFA Football franchise is in its 10th year and FIFA Football 2004 is the most complete and authentic football experience ever released. All new Off The Ball control lets you control the man on the ball and the men off it. Timing runs, anticipating moves, positioning players and jostling for space adds a new dimension to football gaming.

FIFA Football 2004 also now includes 18 leagues, 350 teams and 10,000 players. Other new additions for 2004 include lower leagues from across Europe's greatest footballing nations and a career Mode gives you the chance to take a team from the lower divisions, battle through ranks, sign new players, and turn them into champions.

The action is deeper than ever with advanced levels of player detail and responsiveness. With immersive atmospheres, benchmark presentation, the world's premier clubs, and industry-leading gameplay, the world's best selling football simulation returns as the true authority in football gaming.

"We have continually delivered an in-depth football experience for fans who demand the finest gameplay and most accurate representation of their national and domestic football heroes," said Danny Isaac, Producer for FIFA Football 2004. "With the inclusion of Henry, Del Piero and Ronaldhino this year, we will be able to guarantee that the FIFA Football series continues to be the product number one choice for football fans all over the world."

"The FIFA football franchise is the world's best selling sports series and we are very excited to be working with three of the world's greatest footballers," added Clive Downie, European Marketing Director at EA.