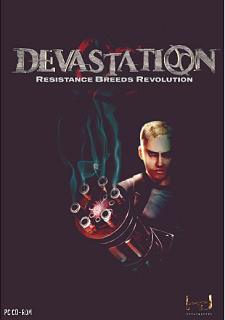 NovaLogic Ltd. today announced the launch of an online graffiti competition at www.devastationgame.co.uk/graffiti to search for the nation's most promising online graffiti artist.

With a top prize of Ł1000, the graffiti competition has been launched in conjunction with the release of Devastation, due for PC on 17th April, and is looking for the graffiti piece that best represents the Devastation world.

Based in a post apocalyptic future, Devastation is a first person shooter-style game that pits rebelling urban street fighters, gang leaders and mercenaries against overwhelming armies of high-tech corporate troopers.

NovaLogic has also teamed up with Twentieth Century Fox Home Entertainment to cross promote the release of Devastation with the forthcoming DVD release of 28 Days Later, a film that shares a similar theme to the Devastation world. Twentieth Century Fox Home Entertainment will be supplying theatrical posters and screenplays signed by Director Danny Boyle, Author Alex Garland and Producer Andrew Macdonald, as well as DVD copies of the film itself, as prizes for the online graffiti competition.

'Working with Twentieth Century Fox Home Entertainment has been a great coup for NovaLogic,' commented Lucinda Searle, Marketing Manager, NovaLogic. 'Devastation shares a similar world to 28 Days Later and both titles have received critical acclaim for their innovative approach to visual imagery.'

'The Devastation graffiti interface is as close to the real thing as you're going to get online', commented 'Cause', a South London graffiti artist. 'The look and feel of the sprays are wicked and I think we're going to see some amazing art being produced.'

The Devastation online graffiti competition can be found at www.devastationgame.co.uk/graffiti.