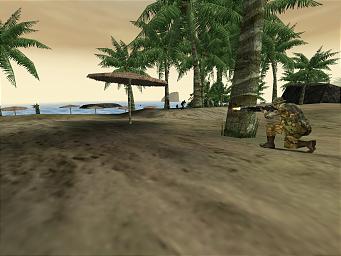 All Images (2) »
The Ghosts are back and ready for more action as Ubi Soft announces the Q3 2003 release of a stand-alone Xbox campaign disk for the award-winning Tom Clancy's Ghost Recon. Tom Clancy's Ghost Recon is the game that gave Xbox Live players the total battlefield experience and earned numerous awards for its stunning gameplay and features, "Xbox Live's most exciting experience yet" said Edge magazine in their review of Ghost on Xbox Live. The game also received an Elite award from the Official Xbox Magazine UK, and Editor's Choice Award from ign.com.

This first-ever campaign disk for the Xbox video game system from Microsoft will not require players to have a retail copy of the original game to enjoy a new Ghost campaign. Both new recruits and seasoned vets who earned their stripes playing the original Xbox game will enjoy the camaraderie of the shared battlefield. Xbox Live soldiers can experience the intensity of the front lines side-by-side with their battlefield brothers while covering each others' backs and calling out commands using the Xbox Live Communicator headset.

"The Clancy brand owes its incredible popularity to gamers who want an intense and realistic gameplay experience," said Alain Corre, Ubi Soft's Managing Director for Europe, the Asia-Pacific region and South America. "With this new campaign disk, Ubi Soft Entertainment can give back to Tom Clancy's Ghost Recon fans, providing them with more of their favourite Ghost action."