KOCH Media goes to war with The Bitmap Brothers 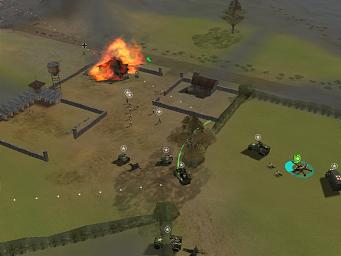 The year is 1944 and as Allied forces prepare for the D-Day invasion, your squads of elite paratroopers land in occupied France to disrupt the entrenched Axis forces. Utilising a fully realised 3D engine, this action strategy title offers gamers incredibly realistic visuals, coupled with a highly advanced AI system, which allows for intelligent and adaptive game play. Such is the level of depth and detail, the game features a 'Hearing' system, where by units not in 'Line of Sight' can be detected if they are within hearing range. It also features an advanced 'Morale' system, where units confidence in battle is varied by the situations and decision of the commanding officer - YOU!

With over 23 historically accurate units per side and 25 single player missions, the war effort does not end there, as all 25 missions, plus 10 unique missions are available for multiplayer via LAN and the Internet using GameSpy. Using real World War II archive footage and a professionally orchestrated audio score and effects, players are immersed into the heart of the action, as machine gun bullets ricochet off stone walls and the thunderous explosions of mortar fire echo's across the battlefield.

"We are extremely pleased to be working with The Bitmap Brothers on this exciting title," said Craig McNicol, Managing Director of KOCH Media. "Their history of game development is exemplary and Frontline promises to be their finest yet."

"KOCH Media are regarded highly in Europe both by retail and the specialist press," said Ed Bartlett, Business Development Director for The Bitmap Brothers. "Frontline is shaping up to be a fantastic and broad-reaching title, and we have absolute confidence in the abilities of the KOCH Media team to do the product justice."

Developed by The Bitmap Brothers and published by and distributed across Europe by KOCH Media, World War II: Frontline Command will release May 2003.