New season, new challenges, WRC 5 is scheduled for October 2015 and will be available for Xbox One, Xbox 360, PlayStation®4, Playstation®3, PlayStation® Vita and PC 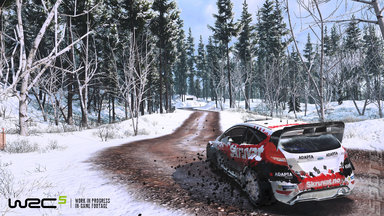 For the first time, an official esports championship will run online in parallel with each WRC round throughout the 2016 season.

The FIA World Rally Championship (WRC) is one of the most challenging motorsport adventures, which pits drivers and production-based cars against some of the toughest and most varied conditions on the planet. WRC 5 naturally becomes the perfect link between drivers and players, between real rallies and virtual driving, encapsulating the excitement generated by these two different worlds.

The eSports WRC Championship will begin alongside the 2016 WRC season in January and more details about the competition will be announced in the coming weeks.

?A great online experience is one of the most requested features expected by WRC fans. We spent a lot of time thinking about something new and really exciting for them? says Alain Jarniou, Game Director of WRC 5. ?Esports is growing really fast year after year, but there are only a few motorsport games which propose an exciting online competition. We really think that WRC esports will be the best challenge ever seen for a motorsport game and for rally fans.? concludes Alain Jarniou.

?We?re very excited at ESL to integrate such an exciting motorsport game into our esports ecosystem,? said Samy Ouerfelli, Managing Director of ESL France. ?The official eSports WRC Championship is sure to be filled with the best of motorsport esports, as fans around the world rally behind not just the online competition, but also its real life counterpart.?

The best esports drivers will battle online on Twitch until an epic live battle during during the final round of the 2016 WRC season.

?New technology has brought an extra dimension to the way in which people can engage with WRC. We?re proud of the ground-breaking digital initiatives we?ve introduced to allow fans to follow WRC when, where and how they choose. Our partnership with Bigben Interactive for the 2016 eSports WRC Championship is the latest example of this, and we look forward to revealing more details to our gaming fans in the coming weeks,? said WRC Promoter managing director Oliver Ciesla.

eSports, or electronic sports, are organised multi-player video game tournaments. The gaming community has become increasingly animated by massive eSports competitions in recent years. The interest around this new generation of gaming is so huge that a study in May 2015 reported that a global audience of 135 million people watch eSports*.

WRC 5 is released on 9 / 16 October (depending on region) and will be available on Xbox One, Xbox 360, PlayStation®4, Playstation®3, PlayStation® Vita and PC.

Aug|'15
JUMP IN THE CITROEN DS 3 WRC AND FIGHT AGAINST THE MOST DIFFICULT CONDITIONS IN A NEW GAMEPLAY TRAILER OF WRC 5
Jul|'15
NEW TRAILER FOR WRC 5!
Jul|'18
EA Sports NHL 19 Invites Hockey Fans into Open Beta
May|'18
“The Power of Football” Continues with PES 2019