New season, new challenges, WRC 5 is scheduled for Autumn 2015 and will be available for Xbox One, Xbox 360, PlayStation«4, Playstation«3, PlayStation« Vita and PC. 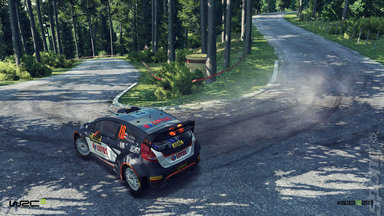 This brand new trailer features the Citroļn DS 3 WRC, driven in 2015 by British driver Kris Meeke , Norwegian driver Mads Ostberg and Khalid Al Qassimi from the UAE, from the Citroļn Total Abu Dhabi World Rally Team. After nine events in 2015, Mads Ostberg is currently in 4th place of the World Rally Championship. Citroen?s first part of the season was marked by an amazing Xion Rally Argentina with the Kris Meeke and Mads Ostberg taking their places on the podium in first and second places respectively.

In the video, rally fans will have a good overview of different stages from WRC 5 under various conditions: night stages in Sweden, stormy conditions in Wales and Germany, scorching end of the day temperatures in Sardinia, Portugal and Spain, and also crazy jumps from Finland. Made from gameplay footage only, it also gives a true idea of the impressive work done by Kylotonn Games to recreate the different rallies from atmospheres and environments as well as realistic car physics.

The FIA World Rally Championship (WRC) pits drivers and production-based cars against some of the toughest and most varied conditions on the planet. In 2015, the roads on this epic motorsport adventure are spread across 14 countries, with 13 rallies on everything from snow packed forest tracks to rock-strewn mountain passes.

WRC 5 is scheduled for Autumn 2015 and will be available for Xbox One, Xbox 360, PlayStation«4, Playstation«3, PlayStation« Vita and PC.