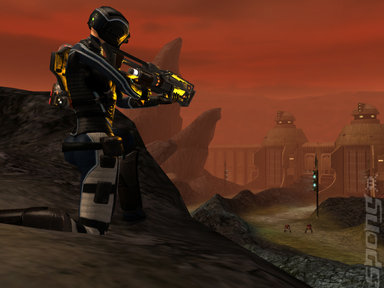 Welcome to the AFS Soldier. It’s about time you started thinking about your military career. Yeah sure, you have a lot of training ahead of you, and you can always start a new path if your career isn’t exactly shaping up the way you wanted it to. But the AFS needs well trained soldiers, so it’s never too early to look into what division you’re going to be aiming for. That being said, here are some of the career choices that will be available to you in the AFS.

This expert of subterfuge excels in moving into enemy territory undetected, and wreaking havoc through deception and misdirection. While still an expert with a gun, this class specializes in the stealthy aspects of war. Any soldier who wants to learn how to move unseen, how to gather vital enemy information, as well as how to silently eliminate threats should look to train as a Spy.

The Spy uses weapons and abilities that rely heavily on LOGOS power to help deceive, misdirect, influence or avoid enemies. The spy prefers sneaking in sight unseen to achieve their goals rather than taking the direct approach.

You will begin your training as a soldier, and advance to the rank of Ranger before being accepted into the Spy Division. Some of the LOGOS abilities you will learn as a Spy are:

Polymorph
In order to infiltrate sensitive locations, a Spy will learn the art of disguise. Using the power of LOGOS, you will be able to take on the appearance of an enemy unit and will be seen as “friendly” by enemy forces.

Traitor
A Spy is also trained to turn an enemy against his own allies through LOGOS. This obviously creates a certain amount of chaos, as the enemy forces shift their attention to eliminating the "traitor."

Cloak Wave
This is a Spy’s Signature Ability. You will learn to harness LOGOS powers to set up a zone at you’re location that will grant any allies within the zone a 75% Stealth bonus.

A spy has a variety of specialized weapons at his disposal. You will receive specialized training in Chain Guns and Net Guns. Due to the importance of silent infiltration, you will also be trained to use an AFS Filament Blade, giving you the ability to sneak up behind your enemies and take them out efficiently and quietly, as well as allowing you to defend yourself in the unlikely chance you are discovered.

This military marksman is master of the Torque Shell Guns, long range warfare, and striking from cover. Delivering devastating surprise attacks on hostiles, these weapon experts are the scourge of the enemy. Any soldier looking forward to picking off as many enemies as possible before openly engaging them in combat should seek out training as a Sniper.

The Sniper uses LOGOS powers to fire at long range and from concealed locations. Snipers thrive as the phantom killer on the battlefield, secretly delivering deadly attacks to influence the course of battle in their favor.

You will start your training as a soldier and advance to the rank of Ranger before the Sniper Division will accept you. Some of the LOGOS abilities you will learn as a Sniper are:

Shredder Rounds
A Sniper is able to coat their current weapon magazine with a substance that adds damage to each shot. Though it only works on rifles, pistols, and Torque shell guns, the damage inflicted by these specialized rounds can be very substantial.

Crit Wave
This is a Sniper’s Signature Ability. You will learn to set up a 25m zone around your location that does not move with you, but can encompass an entire squad. The aim of all allies within the zone is increased so they have a greater chance to critically hit their target.

In order to best prepare for deployment as a Sniper, you will receive training in multiple weapons including Chain Guns and Net Guns. Because much of your attacks on the enemy will be from a distance, you will also receive specialized training in the use of AFS Torque Shell Guns, which fire self-propelled rounds that are capable of delivering substantial damage at great distances as they accelerate and build up kinetic energy. These specialized guns are also highly accurate and quiet, eliminating loud shots that could give away a Sniper’s position.

Richard Garriott’s Tabula Rasa, which is one of the most anticipated PC titles of the year, is set in an epic science-fiction story where players will be challenged by dynamic and fast-paced adventures on unique alien worlds.