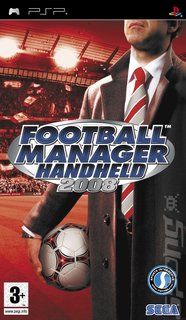 While a new skin and lay-out makes it easier to navigate for players, the addition of a reserve squad doubles the amount of squad members players can use. The player can now also customise their tactics and share them with their friends. The match engine has been optimised as well, meaning the player will spend more time playing and less time waiting.

"Once again, Football Manager Handheld™ 2008 raises the bar for handheld management games, with the team squeezing in as many feature requests from the community as were possible." commented Miles Jacobson, Studio Director of Sports Interactive. "When we first started on the quest for a real pick up and play football management game, we didn't even believe ourselves that the game would be able to have the depth that is does, whilst still being so much fun to play in bite size chunks, or on long journeys and holidays."

With all-new features, greater accessibility, more teams to choose from and a depth only seen from Sports Interactive, Football Manager Handheld™ 2008 offers a management experience better than ever experienced before on a handheld console.