Sierra Entertainment's Scarface: The World is Yours Coming To Wii This Summer 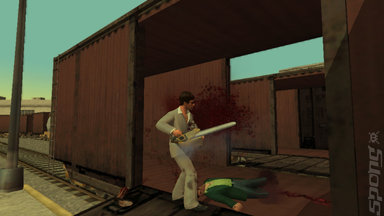 READING (March 2, 2007) - Vivendi Games' Sierra Entertainment division is bringing Scarface?: The World Is Yours, the smash-hit video game based on the 1983 classic film by Universal Pictures, to the Wii? console this summer. The game, which presents a sequel storyline that asks "What if Tony Montana survived the mansion shootout?" has already sold more than 1.5 million copies worldwide on other platforms.

Scarface: The World Is Yours for Wii will include graphics and gameplay optimizations, an all-new control scheme that takes advantage of the Wii console's unique motion-sensitive Remote and Nunchuk controller design, as well as other alterations for the Wii audience.

Scarface: The World Is Yours was created through a licensing agreement with Universal Studios Consumer Products.

"Bringing Scarface: The World Is Yours to Wii is an exciting opportunity to take an already amazing game and add an incredible twist, thanks to the Wii console's unique Remote controller abilities," said Cindy Cook, chief strategy and marketing officer for Vivendi Games. "Adding motion-sensitive elements to a game that already includes an incredible celebrity cast, Hollywood production values and non-stop action, delivers a gaming experience unlike any other, truly bringing the world of Tony Montana to vivid life."

Scarface: The World Is Yours plunges players deep into the seedy underbelly of 1980s Miami as the one-and-only Tony Montana, featuring the likeness of Al Pacino. Players are challenged to re-enact the climactic mansion shoot-out from the original film, but in the game, Tony fights his way out of the mansion and survives. Returning to Miami, Tony must rebuild his fallen empire and wreak vengeance on his enemies.

Scarface: The World Is Yours delivers a Hollywood-quality cinematic experience in a video game, effectively bringing Tony Montana to life through unprecedented casting, leading technology and renowned Hollywood partners. The game has secured a triple-A voice cast of more than 50 celebrities from movies, television, sports and music and boasts a soundtrack of more than 120 licensed music tracks from the 80s and today, as well as the original motion picture score by Giorgio Moroder. In addition, Sierra Entertainment partnered with legendary Hollywood companies to create the feel of a sequel film in a video game, including working with Skywalker Sound to mix all in-game audio and partnering with Prologue Films for to create a gripping opening title sequence.