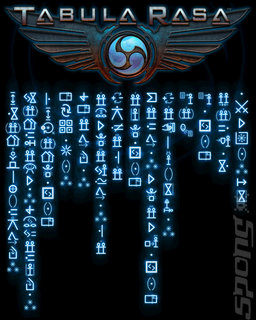 Thursday 1st March/...Richard Garriott, creator of the highly anticipated NCsoft title Tabula Rasa, shares details on the ‘LOGOS’ language created for the game and gives hints on how players will be able to decipher and translate it.

Moreover, as a special bonus, at the end of this press release is a complete paragraph of Logos text. Over the coming months, there will be numerous hints and tips on how to translate this text. The first successful player, who registers their details at the official Tabula Rasa site http://www.playtr.com, will have their own name put into the game.


An interview with Richard Garriott by Game Daily

Building a massively multiplayer online game is truly like building a new world. So when Richard Garriott went about creating his new game Tabula Rasa, he not only developed new planets and alien civilizations he took on the arduous task of inventing a whole new language as well. The language, called Logos, is an integral part of the game-play, story and even the science and culture of Tabula Rasa. The Logos language was developed over several years and will infiltrate every aspect of Tabula Rasa’s universe. As the game reaches its final development stages, Garriott’s development team at Destination Games will provide additional Logos symbols, translations and clues to how Logos impacts the worlds of Tabula Rasa. Richard Garriott took some time to provide some details about the evolution of Logos:

RG: I would like to believe that I am a “Tolkien” style game developer. By which I mean that I believe that designers need to know far more about the history of a universe, its people, its science, is culture and language than ever comes out directly in the telling of the main story. To that end a “real” language or alphabet, lend believability to the reality it is supposed to come from.

2. How does the Logos language differ from the runic language you created for UO?

RG: In Ultima, I used a “runic” language that was sourced in the same way Tolkien sourced his runes for the Lord of the Rings. If you look up runes in any encyclopedia, you will find similar runes that were the forerunners of the Roman alphabet. Runes work great for English speaking westerners, as they are an easy letter for letter substitution of similar letters and can be used to hide words in a simple-to-decipher code.

For Tabula Rasa I had very different needs. While I still wanted it to be easily decipherable, I needed for that to be true regardless of your country of origin and spoken language. Thus I chose to create a “logogrammatic” language. The result also works fictionally. In Tabula Rasa fiction the advanced aliens that left a message throughout the universe would also likely use a pictographic language to make their messages easy to read by all civilizations that advanced far enough to develop language skills.

3. Where does the name “Logos” come from?

RG: The word “Logos” is used in our game both for the symbolic language and for the force-like super powers our players learn to wield. “Logos” is often used to describe god-like powers that manifest reality with the power of your mind and spoken words, such as “Let There Be Light and there was.” Added to this is the concept of a logogrammatic language, which uses pictographic symbols for communication. Put them together and our game has both a language to learn whereby by the players will have a richer experience and be able to actually read writing in the art and architecture left behind by the Eloh in our game. It is also a great collecting game, where people in the game can collect these symbols to expand their personal dictionary. As the game progresses, players can use these Logos symbols to unlock special powers.

4. Were there any unique or special challenges to creating a symbolic language compared to one based on an alphabet?

RG: Absolutely! Creating a language from scratch that was very easy to read by every person on earth is a daunting task! When I started I was not sure I would succeed. I went down many dead ends. For example one research area was Egyptian hieroglyphics. Having never studied them before, it was interesting to discover that they are not pictographic and thus are impossible for even modern scholars to decipher without a primer like the Rosetta Stone. Ancient Chinese calligraphy, on the other hand, was a great source as a complete, actually used pictographic language.

Eventually, my girlfriend and I would sit in a room night after night and put symbols on pieces of paper and lay out various competing ideas around the floor as I tried to create the easiest to read and decipherable codes. I debated issues like whether or not to include tense and gender at varying levels of the symbols. Sentence structure was also an interesting thing to settle on. Most importantly the new language is not a word for word to English language. It is a language of ideas that are universal. Thus, when translating into English or any other language the idea of the symbol is more important than the exact English word.


5. Can you give us an example of “reading the language” by explaining a translation of the following Logos?


RG: Rather than start with the exact answer to this phrase, perhaps I can describe a bit about the structure of the language first. When developing the symbols, I wanted to create as few base symbols and as few modifiers as possible and tried to build more complex words with combinations of these base meanings. I also had to make periodic sacrifices to human history to be sure the human players could read this. For example you will see symbols that look like stick figures of classical Man, Woman, etc. Since understanding those concepts is so important, we have adopted the fiction that all sentient life in the universe is bipedal, and thus you will recognize it when you encounter it, and the symbolic language can use familiar shapes. Similarly we use an hour glass for the concept of time, justified by the explanation that most advanced life will likely go through some sort of water or sand clock timing device in their evolution.

To that end, in our language dots are used to mean specificity, so that first dot is the word “The”. The second symbol of crossed swords (again most advanced cultures likely fought with sticks, then blades), means “Battle” (or war), the triangle pointing to the right means “for” (or to), if it had pointed left it would have been “from”. The next symbol of radiating arrows in an enclosure is the symbol for “control”. The radiating arrows are the symbol for Chaos and the nearly closed box around it is the symbol for “enclosure”. Thus bounded or contained chaos is control. I use parenthesis around a symbol to mean possessive. So parenthesis around a stick figure man would mean “his”, in the next symbol the dot inside of parenthesis means “of the”. The next symbol is a collection of three “star” symbols which is the word “Cosmos” (or universe). There are many symbols which incorporate arrows to imply direction, going, stopping etc. The next symbol is an arrow leaving a boundary line that means “begins.” The final symbol is built by the symbol for time bounded on both sides by the vertical lines. Time with a dot to the right would mean “Future” time with a dot to left “Past”. In this case time between these boundaries means “Now”.

Putting that all together you get: “The battle for control of the cosmos begins now!”

We have found that most of the team members in the US and other territories have all learned to read these symbols after only brief exposure to each new symbol. I hope that people find searching for them and deciphering them as much fun as I have creating them. Just like any living language, Logos continues to grow and evolve. The language includes hundreds of symbols already, and more are being created all the time, as they are needed to say things inside our game.

Anxious to be a part of the discovery and adventure of Tabula Rasa? Destination Games and NCsoft challenge you to decrypt a message in Logos for a chance to have an in-game character named after you! Visit http://www.playtr.com to see the official rules and to get help in translating the following message. Good luck!
Companies: NCsoft Europe
People: Richard Garriott
Games: Tabula Rasa